Pericardial fluid and the diagnosis of tamponade demonstrated through two patient cases.

Pericardial effusion (PCE) is important both in the hospital and in the clinic. We must be competent not only at detecting PCE, but in sensitively detecting pericardial tamponade (PT) because this determines how rapidly we must act.

PCE can be free flowing or loculated and all cardiac views are needed to detect and size the PCE. IMBUS-Core trained physicians can competently identify the anechoic fluid of PCE in the different views and differentiate the fluid from epicardial fat (follows the normal motion of the pericardium and has some echogenicity made more obvious by increasing the gain, typically <1cm in thickness, and most frequently seen around the right heart). The rest of this chapter focuses on PT. The subcostal4 view, particularly with a patient standing, should be the most sensitive way to image free flowing pericardial effusion.

PT can present insidiously and nonspecifically in the clinic. Patients with severe PT (hypotension, ≥ 2 cm wide effusion, a swinging heart, and collapsing RA and RV) usually are sick and go right to the hospital. They are not a diagnostic challenge if the views are good. Identifying subtler PT in less sick patients takes more knowledge and skill. PT was diagnosed in two clinic patients within several weeks of each other and together they demonstrate the diagnostic issues.

A mitral valve was repaired, and the patient did well for several weeks, but then noticed an increased heart rate, decreased appetite, and a little more shortness of breath during cardiac rehab. Here is how the IMBUS exam happened in clinic.

Given the symptoms, the physician looked first at the JVP. He noticed that the patient’s JVP was periodically elevated, but only during inspiration, which is a positive Kussmaul sign indicating compromised right side of the heart. The very start of the following clip shows the IJ vein distended at peak inspiration and then it collapsed as the patient exhaled.

The patient then had cardiac IMBUS, starting with the PLAX view. As shown in the following clip, the patient was tachycardic and systolic function appeared at least mild/moderately reduced, which would be typical after a mitral valve repair. The mitral valve looked intact and color flow Doppler showed no mitral regurgitation. The distinctive hyperechoic structure bulging into the LA with a subtle double bounce was not immediately explainable. Notably, pericardial effusion was not of a significant volume in the PLAX.

The PSAX was next, and while it was only a fair view, it was suspicious for a pericardial effusion at the lower left. In addition, about ¾ of the way through the clip the LV becomes clearer and there was an unusual bounce to the septum that seemed to happen with inspiration. This increased interventricular dependence alerted the physician to the possibility of PT, but the lack of clear-cut PCE was puzzling.

The physician then slid the probe a little lateral around the apex to a partial RV enhanced view and then the PCE was more obvious and the RV continued to look like it was collapsing, but the views still weren’t great, and the plane was still slightly off rotation.

Being very concerned about PT, the physician rotated the probe towards an apical3 view and angled a little toward the right side. Now, the bulging structure into the LA was seen as a portion of pericardial fluid connected to the larger effusion and bowing in the left atrial wall at end diastole. This indicated that the pressure in the pericardial sack was becoming greater than minimal LAP. This was a dangerous sign. The PCE and the RV were a little hard to distinguish.

Hoping for further clarification, the physician went to the subcostal view. Now, the PCE was quite obvious and was about 3 cm wide on top (the inferior heart) and about 1.5-2 cm at the bottom (the superior heart). This indicated a large PCE, but probably not fully circumferential and possibly somewhat loculated. The RV again seemed to be collapsing.

As a final measure to investigate PT, the physician went back to the apical4 view and performed mitral inflow analysis with pulse wave Doppler. He changed the sweep speed to SLOW so many complexes would accumulate on the screen. He watched while the patient inspired and then expired and froze the screen to show the higher peak mitral inflow velocity with expiration, followed by the lower peak velocity with inspiration. The patient was in sinus rhythm, so the single complex is a fused E/A wave because of tachycardia. Because the patient’s heart was not swinging very much (swinging results in the interrogation location/angle, and thus measured peak velocity, changing from beat to beat), the variation of the E wave with inspiration is a measure of PT. In this patient, there was a 30% decrease in peak E velocity with inspiration. Over 25% is clearly abnormal and 30% is highly likely to be PT. The potential false positive error with this method comes when normal respiratory movement of the heart moves the Doppler gate in and out of the optimal flow position. 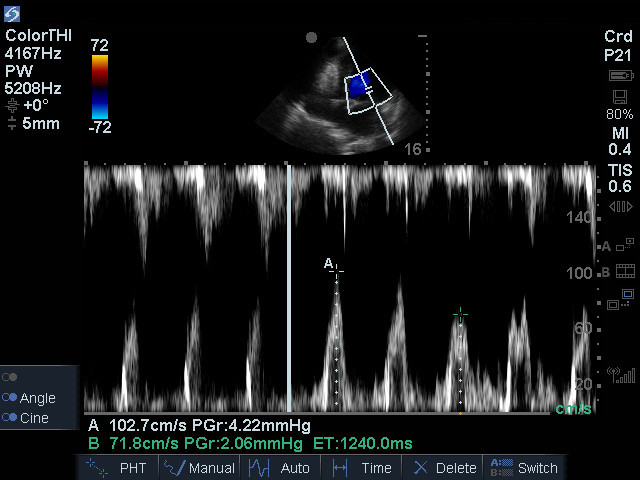 If the pulse wave Doppler mitral inflow analysis had not been possible, the physician could have used pulse wave Doppler of the carotid artery to measure the inspiratory reduction in flow velocity on SLOW sweep speed. The carotid is not subject to much respiratory movement, so velocity changes are more reliably caused by real changes in LV output. This is a more precise technique than classical pulsus paradox with a blood pressure cuff, but it means the same thing; the greater the decrease in carotid velocity with inspiration the greater the evidence for important PT, with 15% being where suspicion begins.

This first patient was urgently admitted, confirmed to have PT, 140 mL of bloody fluid was withdrawn, and the patient felt better. However, the fluid reaccumulated the next day and it was decided that the patient needed a surgical drainage procedure to prevent pericardial constriction. The pericardial effusion was not infectious but just an inflammatory complication of the cardiac surgery.

This patient had received a right pneumonectomy years ago for lung cancer. He had done well and was in for an annual physical. With review of symptoms, he mentioned that he thought that his breathing had been a little worse the last few weeks. This prompted cardiopulmonary IMBUS.

The JVP was not assessed in this case, which was a mistake, but it was because the physician thought there was going to be a pulmonary problem because the patient had no previous cardiac disease. The right side of the chest had no lung, and nothing was seen with IMBUS. However, on the left side there was a mild to moderate pleural effusion. Cardiac IMBUS was then performed.

This was an unusual and difficult exam because the complete right pneumonectomy had shifted the heart to the right. There was nothing in the standard left parasternal or apical windows. The physician then moved the patient supine and looked for a view in the right parasternal area. The view was not good, but the clip shows that with a PSAX-type view there was clearly a PCE and the septum intermittently pushed into the LV and this was seen to happen with inspiration.

The suspicion of PCE with PT was now high, so the physician hunted lower along the left sternal border for something that might be an apical4 and got this poor view. It appeared to show a fairly large PCE with a swinging heart.

Finally, the physician worked subcostal, angling towards the right chest. It was then definite that there was at least a moderate sized PCE with collapsing of the RA and RV.

Variation of E with inspiration could not be measured because of the poor apical window. Respiratory variation of carotid flow velocity could have been done, but by this point the physician knew there was an emergency and this patient was urgently admitted and quickly drained of 300 mL of bloody fluid. He felt much better and his hemodynamics were improved. At the time of the procedure, the pressure in the pericardium measured 15 mmHg, clearly indicating PT. Despite the concern about recurrent lung cancer, cytology was negative on the fluid and the etiology of the fluid remained unclear.

A. Good, but flexible technique and atypical views are sometimes needed to evaluate PCE and PT. Pulse wave Doppler skill is also important.

B. The increased pressure around the heart in PT causes substantially elevated RA pressure, which can be seen in increased JVP with a Kussmaul sign and in a dilated IVC that doesn’t collapse with inspiration.

C. RA collapse is an early sign but by itself does not indicate clinically important PT. RV collapse is a later sign usually associated with symptoms, but it can be hard to determine in a swinging heart. LA diastolic collapse would occur after RA and RV diastolic collapse. A large PCE with a swinging heart is almost always associated with hemodynamic compromise.

D. Ventricular septal shift towards the LV with inspiration (increased interventricular dependence) is an important and accurate marker of hemodynamically significant PT. It may take various views to be able to see this change with inspiration.

E. While a 25% or greater drop in E between expiration and inspiration is a traditional marker of concern for PT, false positives can occur if heart or respiratory movement cause the maximum E wave to move in and out of plane.

F. Variation in the pulse wave Doppler carotid peak velocity with inspiration may be a more robust marker of PT; as the change is progressively greater than 15% clinically important PT is an increasing concern.

H. A PCE that is modest or less in severity with normal septal motion with inspiration, no hint of RA or RV collapse, and normal respiratory variation in E wave or carotid velocity can easily be seen back in clinic in a handful of days to be sure the PCE is not expanding. If such a patient seems systemically ill, the interval to repeat examination should be shorter.

I. A PCE that is at least modest with any of the markers of hemodynamic compromise equivocal or positive needs early formal echocardiography. The sicker the patient seems, the more the formal echocardiography would be done the same day. For less sick patients, an interval of several days evaluates the hemodynamics and the rate of PCE accumulation.