Regurgitation, RV systolic pressure assessment, and the influence on our understanding of central venous pressure.

TR is the main concern with the tricuspid valve (TV) because tricuspid stenosis is rare. The TV is more difficult to image than the mitral valve. It may take a slightly more cranial apical window to see well and the RV enhanced view may be needed in the apical4. The PLAXR, PSAX, apical4, and apical3R views should all be evaluated with any hint of TR, with the latter two being the most parallel to flow through the valve.

Trivial TR is common and functional TR (caused by RV dilation or pressure overload) is much more common that primary structural TR. Twenty percent of RV pacemaker leads cause TR, and this can be a nidus for endocarditis. Quantification of TR is similar to AR and MR quantification.  As with other valve lesions, the preload, afterload, and contractile state of the patient will vary the apparent severity of the TR. Chronic, severe TR should have a dilated right atrium, as well as abnormal IVC and IJ. Eventually, with moderate to severe TR, the RV will become dilated and have reduced function because of the volume overload. TR that is mild or greater in severity should be followed periodically with IMBUS for progression. Valve centers are becoming more aggressive correcting moderate or greater TV with new transvenous approaches because mortality increases with the severity of TR.

This is a patient with a pacemaker and mild TR as seen in this PSAX at the level of the aortic valve.

Next is the same patient with a view from the apical4 where the TR is more impressive around the pacemaker.

And here is a final view of the TR in the same patient from an apical3R view (discussed in the Advanced Right Heart chapter). Again, the TR nicely courses along the pacemaker lead.

This is a patient with at least moderate TR in the PSAX. There is also some central AR seen.

Next is a patient in whom the subcostal4 showed the best and strongest TR. The Color sector box needed to be a little wider in order to see the proximal part of the TR on the RV side.

The remaining TR examples will be in the apical4. The first is a central TR jet that showed a definite, but small, convergence zone. The jet itself is not large so this is probably the lowest grade of moderate. The right atrium is not enlarged.

This next clip is the B-mode image in an apical4 that should have had less depth, but the view is nevertheless good. The thing to notice is the bulging of the RA towards the LA. This is a right atrial septal aneurysm.

When Color was applied, TR was seen with a large convergence zone, thick vena contracta, and a long and aliased jet moving eccentrically along the inter-atrial septum, pushing the RA into the LA during systole. This is moderate to severe TR augmenting the right atrial septal aneurysm.

This penultimate case has a large convergence zone and thick vena contracta with a strongly aliased jet. This would be entering the severe range for TR.

Finally, here is another severe TR with a large convergence zone, thick vena contracta, and a wide jet

Severe TR from a structural lesion does not necessarily produce severely increased RV and pulmonary artery pressures. When pulmonary hypertension develops, from whatever cause, the elevated RV pressure begins to push on the tricuspid valve, but the amount of TR may be mild despite high pressures. Nevertheless, the TR jet can be used to measure the gradient across the tricuspid valve. If possible, measure the jet in multiple views (PLAXR, apical4, apical3R to increase the chance that the maximum velocity has been found.

A small TR jet with uniform blue color usually indicates low velocity flow inconsistent with a high gradient between the RV and RA. However, it is important to learn to measure this gradient well so even trace TR jets should be analyzed.

Position the continuous wave Doppler gate line parallel to the TR jet flow with the area of interest in the vena contracta of the jet. We want the maximum gradient, which should be with inspiration.  Here is a good tracing with the peak velocity measured.  Venue calculated the gradient using the Bernoulli equation. To be picky, the peak was probably over-measured by about 0.3 m/sec because the cursor was placed toward the tip of the “beard” and not at the more defined “chin”. 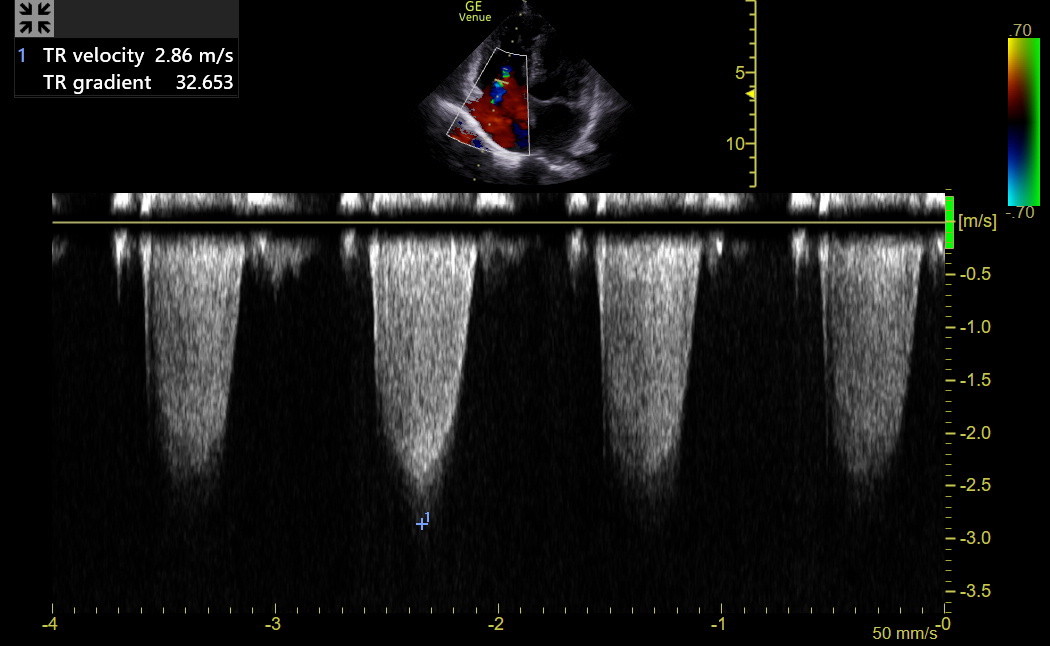 It is important to see a clear enough spectrum, or it isn’t worth trying to measure. Freeze and measure the depth of the biggest negative spectrum. In the above example, the maximum velocity was 2.9 m/sec, which was a gradient of 33 mmHg. This velocity can only be underestimated, not overestimated.

Traditionally, estimated right atrial pressure, based on the IVC, was added to the tricuspid gradient to estimate peak RV systolic pressure. However, most experts realize the inaccuracy of this estimate, so the emphasis has now shifted to using the TV gradient alone, which has an upper limit of normal of about 21 mmHg and an equivocal range of 22-27. TV gradients greater than 27 mmHg are seriously concerning for pulmonary hypertension (if pulmonic stenosis is excluded).

Here is a CW spectrum from another patient in whom the peak velocity was 4.25 m/sec, which was a peak gradient of 72 mmHg. This is substantial elevation in RV systolic pressure.

In the next chapter on Diastology and Volume assessment, an elevated TR gradient is one of the indicators of more advanced chronic diastolic dysfunction, which is another reason to learn to measure the TR jet well.

In the most severe TR, the continuous wave Doppler spectrum may be triangular shaped and unreliable for gradient measurement because the pressures in the RV and RA begin to equalize. If the TR spectrum is indistinct, it is also dangerous to make the measurement.

A number of factors influence the measurement of the tricuspid gradient at any particular time. Accordingly, the most reliable diagnosis of pulmonary hypertension comes from a right heart catheter. We want to identify patients with undiagnosed, or newly increased, tricuspid gradients who need to move ahead with formal echo and then right heart catheterization. The chapter on Advanced Right Heart Disease explores this in greater detail.