The carotid artery is the first cardiovascular chapter because it is an ideal way to begin understanding spectral Doppler. However, this exam has utility for cardiovascular risk assessment and for estimating volume responsiveness in patients.

Carotid stenosis quantification is occasionally needed in clinic (see section at the end of this chapter). However, detecting carotid atherosclerotic plaque is routine and important. Here is a depiction of the carotid artery anatomy in the neck. The internal carotid remains larger and more posterior than the external carotid. 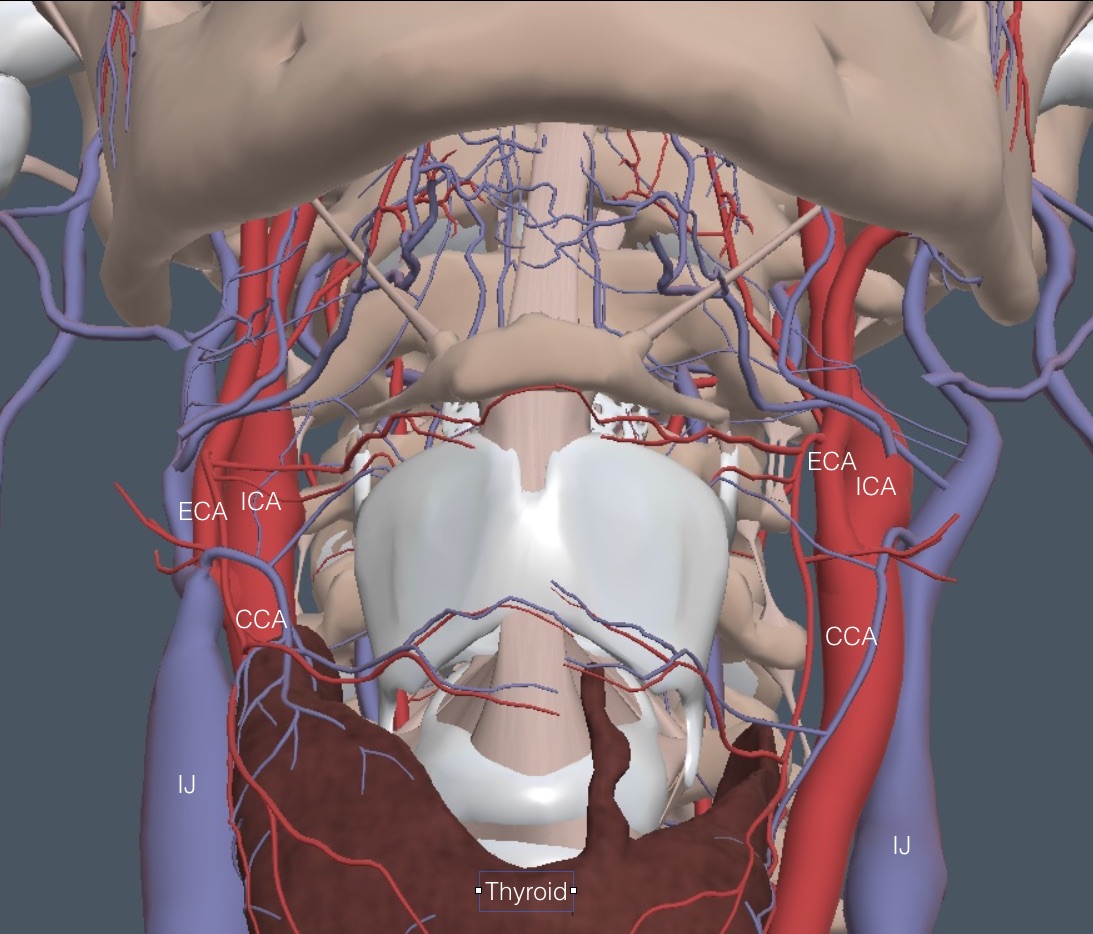 Technique: Have the patient supine. Plaque occurs near the bifurcation and into the internal and external carotids, with the internal carotid being more important. Position the linear probe transversely in the mid neck and look for the bifurcation. If plaque is evident in the transverse position, estimate the amount of luminal narrowing. If plaque is not visible in the transverse position, switch to a longitudinal view which is more sensitive for smaller plaque because the beam is perpendicular to more of the wall. The following clip shows an optimized transverse view of the right carotid at the beginning of the bifurcation. Non-obstructing hyperechoic plaque is seen.

Below is a moderate plaque in a longitudinal carotid just at the beginning of the internal carotid. Stenosis was minimal with this plaque.

The presence of carotid plaque confirms non-coronary atherosclerotic disease, which should put a patient in a higher risk category, usually requiring maximum secondary prevention therapy. Thus, patients at intermediate risk for atherosclerotic vascular disease could have a carotid survey first, instead of a coronary CT study. If plaque is seen, the coronary CT might not be needed for risk stratification. If plaque is not seen, the CT could still be done. In this situation, ultrasound is specific but not completely sensitive.

AN EXERCISE IN SPECTRAL DOPPLER

Image the right carotid transversely just above the clavicle, optimizing the carotid image. Then, rotate the probe so the indicator is cephalad and optimize the longitudinal view of the carotid, several cm below the bulb. The carotid in this location will be horizontal on the screen.

Activate Color flow Doppler: The default Color sector box width and height for the carotid setting on Venue is appropriate for most carotids. The greater the width of the box the lower the frame rate for the Color image. The height of the box does not affect frame rate, but excessive height can lower the scale of the Color flow, resulting in greater aliasing (discussed in detail in several heart chapters). Optimizing the width and avoiding excessive height of the Color sector box applies to any use of Color. The default carotid Color sector box is tilted +20 to enhance the display of red flow coming from the heart on the right.  Adjust the GAIN so Color fills the vessel without any speckling (flash) out beyond the vessel. Here is a clip of optimized Color in a longitudinal common carotid. The flash of yellow with each beat is “aliasing”.

Activate PW: PW is used to measure the velocity of blood flow normally seen in the body (< 2.0 m/sec). The gate line needs to be as parallel as possible to the flow or velocity is underestimated. Move the gate and use angle correction to get the gate in the middle of the vessel, parallel to flow. Here is an optimized PW tracing showing appropriate gate placement in the upper B-mode image. 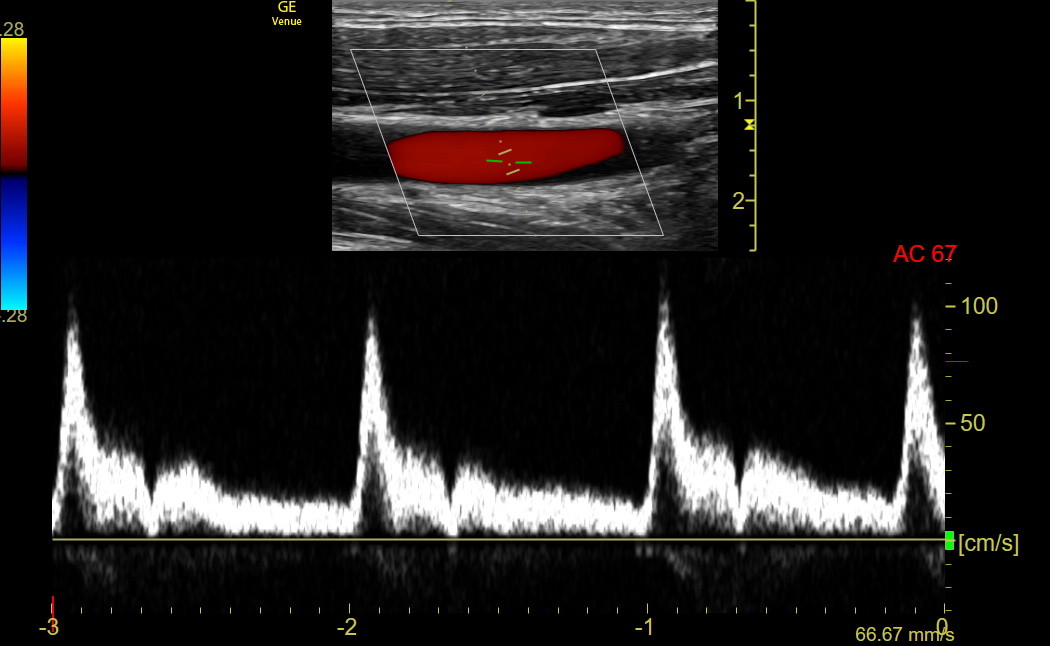 Make sure the PW complexes occupy most of the graph. The Baseline can be moved with a finger and the complex size adjusted with two fingers contracting and expanding vertically. The tracing above is excellent. The peak velocity of a complex could have been measured and would have been about 1.0 m/sec.

The carotid flow time is a measure of LV ejection time, a classical measure of LV function that is dependent on heart rate, preload, afterload, and contractile state. It is optimal to capture this measure at end expiration when left heart volume and function are maximal. The complexes in a tracing need to show good dicrotic notches, which indicate aortic valve closure. When these are seen, freeze at end-expiration. The second complex in the tracing above is excellent for measurement.

Measure the Cycle Time: put a first caliper at the start of the carotid upstroke and then an ending caliper at the beginning of the next upstroke. This is the CYCLE TIME (CT). In the following tracing, the CT was 0.99 seconds. The heart rate (HR) of this beat is 60/0.99 = 60.6 bpm and Venue calculated this but rounded down. 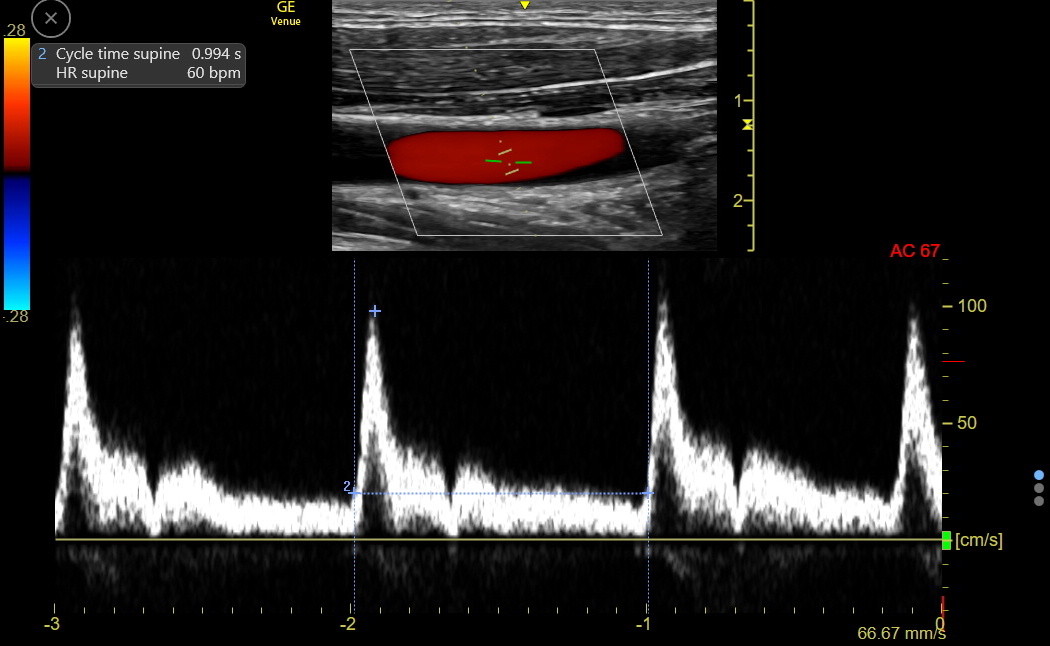 Measure the Carotid Flow Time (CFT): Put the first caliper again at the start of the carotid upstroke and measure to the central depth of the dicrotic notch. This is the raw CFT and was 321 msec in this example. 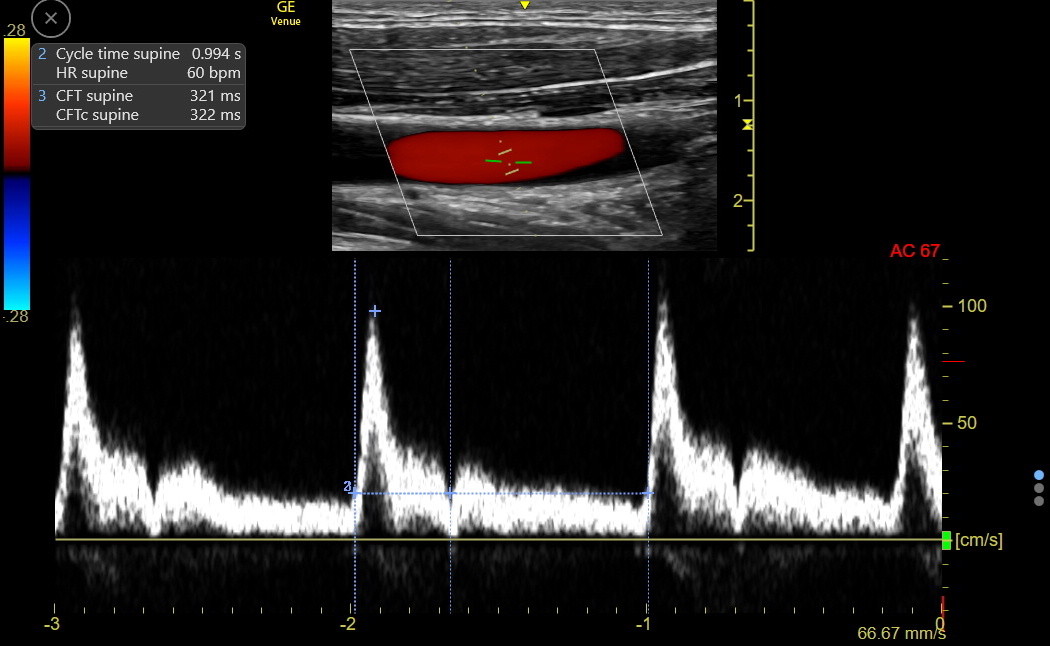 The raw CFT is corrected to a heart rate of 60 bpm using an empirically derived formula that Venue uses:

This patient’s CFTc was 322, virtually unchanged from the raw CFT because the heart rate was barely over 60 bpm..

A series of 142 normal volunteers showed a 95% normal range of about 280 – 360 for the supine CFTc. Importantly, a 45-degree passive leg raise for 1 minute caused a mean change of about 2% in the CFTc in these normal adults, although a few showed greater changes because the CFTc is sensitive to changes in volume status. Normal individuals at the COC clinic have also shown good response to passive leg raise when they have been less than fully hydrated.

The main proposed use of the CFTc is to detect dynamic volume responsiveness with the use of a one-minute passive leg raise, which requires a helper. The head of the table should be flat for the leg raise. It is key that the patient does not help lift the legs but relaxes the abdomen and breathes normally. An induced Valsalva maneuver will blunt the effect of any autobolus. As the increase in the CFTc with leg raise is progressively greater than 5%, the evidence for volume responsiveness strengthens. It is probably best to ignore the absolute value of the supine CFTc and focus only on the dynamic responsiveness. Heart failure patients being diuresed could have dynamic CFTc measurements to help identify when they become volume responsive and not in need of further diuresis.

CAROTID STENOSIS: For the Advanced IMBUS physician, determining the degree of carotid stenosis is like determining the severity of aortic stenosis. The peak PW velocity in the stenosis is measured and compared to the velocity in the mid common carotid. The pre- and post-stenosis velocity ratio is interpreted like the dimensionless index (DI) for aortic stenosis, except that the numerator and denominator are reversed for carotid stenosis. Peak velocity through a stenosis that is less than 1.25 m/sec with a ratio less than 2.0 when compared to the common carotid indicates stenosis less than 50%. Peak velocity of 1.25 – 2.3 m/sec and a ratio of 2.0 – 4.0 is stenosis from 50 - 70%. Peak velocity greater than 2.3 m/sec with a ratio greater than 4.0 indicates stenosis greater than 70%. We can measure these higher velocities because of the PW angle correction function of Venue. Nearly occluded carotids are probably a visual diagnosis because only very narrow residual flow may be seen and there is difficulty getting the PW gate in the small residual jet.