The left and right atria have function, which is lost in atrial fibrillation and is decreased in some other situations. A pressure load on the atria appears to be more harmful to function than a volume load and various causes of heart failure with preserved ejection fraction, including infiltrative diseases, can reduce atrial function. Atrial ejection fraction has been measured by cardiac MR and atrial longitudinal function is being studied with speckle tracking, which measures longitudinal strain. Various publications have noted that as left atrial function deteriorates with preserved sinus rhythm, the velocities of both the A and a’ waves may fall.  This becomes an issue in the assessment of diastology that is discussed in a future chapter.

The LV size/function chapter contains a table that shows the weighted means for A waves as people age (they increase). An A wave that is abnormally low for age should raise the suspicion of LA dysfunction. Similarly, an abnormally low a’ for age can raise this suspicion. The RA can be similarly dysfunctional but there is less information about measuring A and a’ on the right side.

The focus in the rest of this chapter is the size of the atria. As with other aspects of cardiac IMBUS, eyeballing of atrial size is an acquired skill that takes many repetitions during which the eye is correlated with some measurements. Both atria have complicated shapes and no single view gives an accurate size estimate. As a result, echocardiography underestimates atrial size compared to volumetric MR measurement.

A quick overview of the tributaries to the LA and RA can be helpful in interpreting color flow Doppler for mitral and tricuspid regurgitation as well as in defining where the atria end and the tributaries begin for area measurements. It is also helpful to spend a little time examining the atria with a 3D model of the heart. The video below is a quick overview of the anatomic entrance of the 4 pulmonary veins into the left atrium and then the entrance locales of the IVC and SVC into the RA.

Left atrial size has been called the “hemoglobin A1c of left heart function”. Expertise in LA size assessment develops only with careful and repeated measurements. It is impractical for us to measure the gold-standard LA volume, but several valid LA size measurements are fairly quick to perform.

In the PLAX, the LA width at end LV systole (maximal LA size) at the level of, and parallel to, the aortic valve is an old test with only 50% sensitivity because the sternum and spine constrain the anterior-posterior expansion of the atria and most atrial enlargement occurs in the cephalad/caudad and lateral dimensions. This measurement should only be made when the LA appears enlarged in a patient with poor apical and subcostal windows. The LA width varies with patient height, but will be < 4.0 cm in most normal adults. Here is an image of the PLAX LA width in a normal patient. 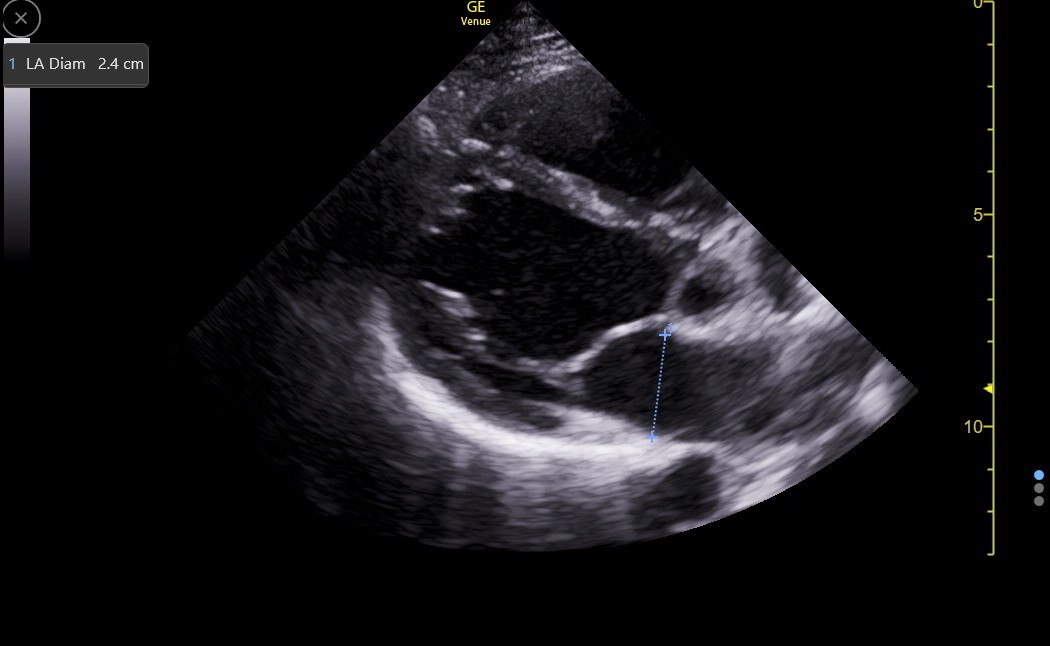 Occasional patients can have a mirror image artifact into the lung below the LA and LV in the PLAX. Depending on the gain setting, the LA width can be measured to the end of the artifact and be falsely high. Increase the gain to identify the end of the LA more clearly.

When the apical4 LA view is good during an IMBUS exam, the LA area is the most robust size measurement for IMBUS. The subcostal4 views can also be used for confirmation. Get the best view of the LA. Freeze the image, find the maximum size, and then use the machine method for measuring area. Normal area in an average size adult will be under 20 cm2.  Here is an example of LA area measurement. The table at the end of this chapter gives the size ranges for increasing degrees of LA enlargement. 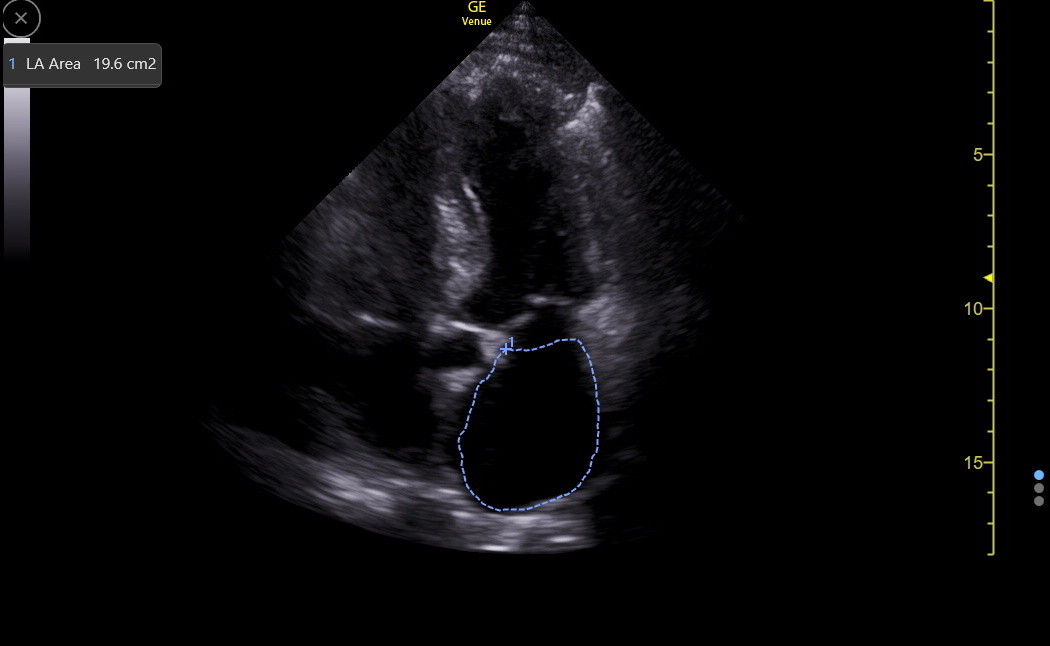 There is less research and clinical data about RA size, which is mostly evaluated in the apical4 and SC4 views. A normal RA in the apical4 appears about 85-90% the size of a normal LA and both vary with patient height. However, by MR, the RA is not smaller than the LA. The RA will dilate with pulmonary hypertension, an ASD, tricuspid valve disease, right ventricular failure, and atrial fibrillation. It may require an RV enhanced apical view to best see the RA.

Often, if the LA has been measured, the difference between the RA and LA can be eyeballed. If the RA is a little smaller than a normal LA in the apical4, measurement isn’t needed and the RA is normal. If the LA is large or if it is normal but the RA appears larger than the LA, the RA needs to be measured. Here is a giant RA seen in an elderly woman with severe TR. 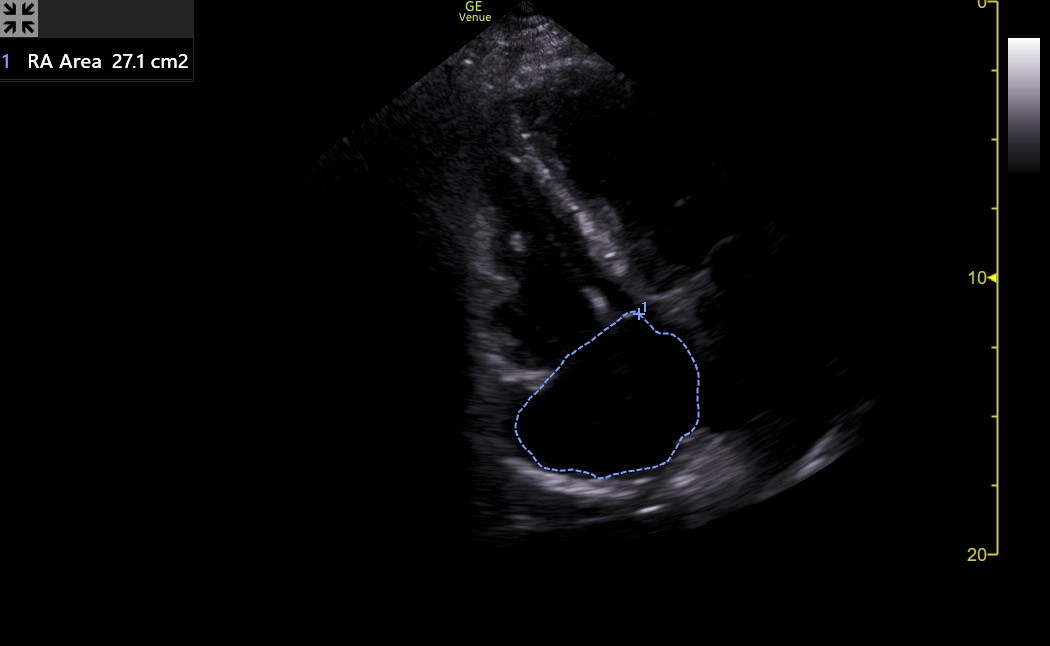