This chapter assumes basic skill in acquiring standard views of the heart and will cover a few special aspects of these views, as well as some more advanced views. The heart and lungs move with changes in body position. The left lateral decubitus position improves most views in many patients, but some patients have shoulder or mobility problems that make this position difficult. The supine position must then be used for all views.

The optimal parasternal window is not reliably in any specific interspace. In addition, some structures may be better seen in a higher interspace (e.g. aorta and aortic valve) while others are better in a lower interspace (papillary muscles and distal LV).
Thus, it is optimal to spread a good amount of gel along the left sternal border from the 2nd to the 5th interspace. This is probably most easily done by carefully carrying over a loaded probe and depositing it on the area. 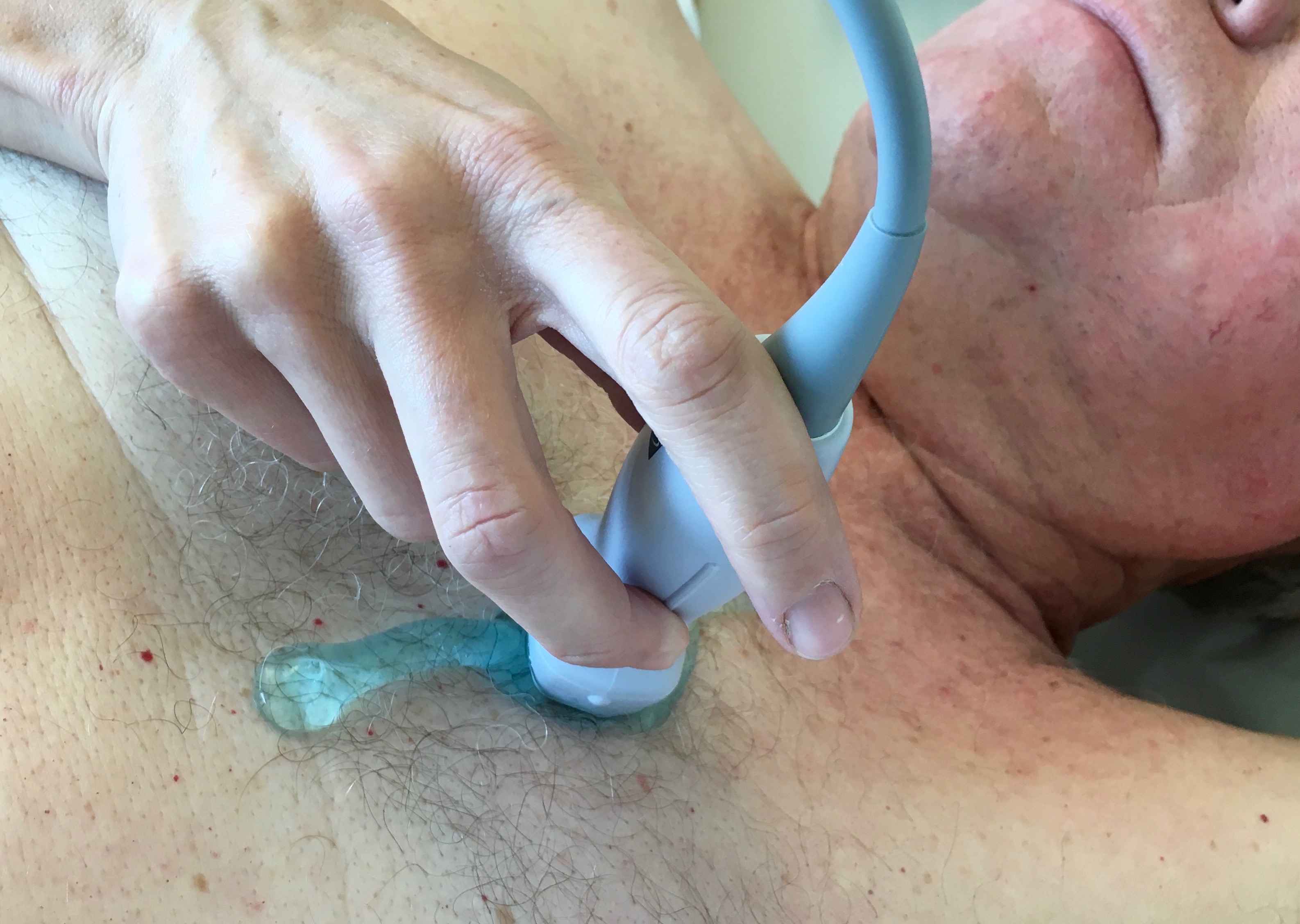 The default depth for the heart with Venue at COC is deliberately set several centimeters greater than needed for the average heart to facilitate detection of pleural and pericardial fluid in the PLAX. After this fluid assessment, the depth must be brought up to just below the pericardium. Then, move the probe to a higher interspace, hoping to get a good view of the ascending aorta as discussed in a subsequent chapter. Next, briefly evaluate each lower interspace before settling on the best window for the standard view. We are assuming familiarity with the normal PLAX and PSAX and will not show them here.

The short axis descending aorta is usually seen below the left atrium in the PLAX. However, there may be another nearby vascular structure, the coronary sinus, which can be seen in the PLAX right underneath the posterior mitral valve. This is the vein that collects the venous blood from the myocardium and returns it to the RA. It runs on the posterior heart in between the atria and the ventricles. It enlarges when RA pressure is increased or in a congenital abnormality of the left subclavian vein. A normal coronary sinus is < 1 cm in diameter. Here is an enlarged coronary sinus (just below the posterior mitral valve annulus) in the PLAX. The patient has other abnormalities that we ignore for now.

A standard PLAX emphasizes the left heart but there is a modification that emphasizes the inflow part of the right heart. We call this view the PLAXR and some experts think it should be a standard view during most exams. From the PLAX position, the probe is modestly fanned to look anterior under the sternum. In most patients this will feel like a tip of the cord toward the patient’s left shoulder.

On the screen, the inflow part of the RV is above, the anterior and posterior leaflets of the tricuspid valve (TV) are in the middle, and part of the right atrium (RA) is below. The RVOT may be seen heading off to the upper right. In the RA, the IVC enters at the bottom left with the coronary sinus entry in a notch above the IVC.

The apical4 probe and hand position can be thought of as a PSAX moved out to the apex. The most important error with apical4 is failure to get lateral and caudal enough on the chest. This results in the probe being superior to the apex of the heart and the LV becomes more rounded in appearance instead of looking like a “bullet”. Always go out fully lateral and caudal until lung is seen and then gradually move medial and cephalad until the window comes into view. An occasional patient needs to be turned toward supine to improve the apical view.

The standard apical4 seeks to have the septum vertical on the screen with the atria and ventricles full size with two leaflets of the mitral and tricuspid valves visible. This does happen occasionally, as in the following apical4.

Unfortunately, this full view may not be possible, and the probe is then sequentially adjusted to allow observation of different parts of the heart. One adjustment is the RV enhanced view. In this view, the probe is moved out lateral and cephalad around the apex so the septum on the screen leans toward the RV. While part of the lateral side of the LV may disappear, the lateral RV may be better seen, and the interventricular septum may be more defined because it is more perpendicular to the ultrasound beam. This clip shows an RV-enhanced apical4.

To obtain the LV enhanced view the probe is moved medial around the apex angling toward the lateral wall of the LV. The septum tilts toward the LV on the screen and the LV lateral wall is better seen. Here is an LV-enhanced apical4.

Two additional views are subtle modifications of the apical4. An important one is the apical 5 chamber (apical5) that brings the aortic valve and LV outflow tract into view. This view requires a slight, cephalad/anterior fanning of the probe so the cord goes down. This is usually the most important view for measuring the severity of aortic stenosis. Here is an apical5.

Next is an enlarged coronary sinus in a patient with chronic RA pressure and volume overload.

There are two other important apical views achieved from the apical4 with a slow rotation of the probe, so the indicator moves cephalad (counterclockwise). It is important to stay over the LV so rotate carefully, usually with two hands. During the rotation the right side of the heart should disappear, and the apical two chamber (apical2) is seen after about 45 degrees of rotation. In this view the LV is on top with the LA below. Here is a normal apical2.

If the probe is rotated another 45 degrees counterclockwise from the apical2, the apical 3 chamber (apical3) will appear. This is also called the apical long axis because it is the same cut through the heart as the PLAX (same probe orientation as the PLAX), but now the view is from the apex (the PLAX gets tipped up). Notice that the apical3 is a 90-degree rotation from the apical4 just as the PLAX is 90 degrees away from the PSAX. The aortic and mitral valves are viewed more parallel to flow with the apical3 than with the PLAX view. Here is a normal apical3.

Just as the PLAX was easily modified to the PLAXR, the apical3 can be shifted to a view we call the apical3R with a fan anterior to the right heart (cord tipped down toward the exam table). This view is mostly parallel to flow through the tricuspid valve but with a different plane through the valve than the apical4.

The RV is above on the screen, the tricuspid valve in the middle with the RA below. The RVOT is the “third chamber” heading off to the right.

The subcostal (SC) view is important in many patients. It is optimal to obtain this while the patient remains in the left lateral position, which increases the chance that the liver will be down below the costal margin, giving a sonic window, and the antrum of the stomach will be decompressed. Occasionally, the subcostal views are best when a patient stands. If no liver is seen at the top of the screen, have the patient take in a deep breath and hold it to bring the liver down. The heart may appear mostly transverse or may be tipped partly vertical. The standard SC is a SC4 and it looks like an apical4 turned sideways.

The SC4 is particularly good for seeing pericardial effusions if the probe is fanned to the caudad heart. The SC4 can also be excellent to measure chamber sizes and wall thickness because the ultrasound beam is more perpendicular to the walls. Here is a SC4 that quickly shifted to a SC5.

A final important view, the subcostal short axis (SCSAX), is obtained from the SC4 by rotating the probe 90 degrees counterclockwise (indicator moving anterior). This view is important for a variety of things depending on whether the ultrasound beam is slicing through the ventricles, the pulmonic and aortic valves, or the atria. The uses will be discussed in subsequent chapters. Here is a SCSAX through the ventricles showing the LV doughnut much better than the PSAX in the patient.