An overview of right ventricular size and functional assessment

Right ventricular filling and output are maximal toward the end of inspiration, which is when most measurements should be taken. However, this may be when some views are poorest, so use the best view and accept the compromise. Some aspects of RV size and function vary with body height.

It is harder to evaluate RV size than LV size. The RV sits mostly behind the sternum, so views can be challenging. The RV shape is also complicated, with the inflow portion and the outflow portion at an angle to each other, resembling a bagpipe. The RV is first seen in the PLAX view when part of the RV outflow tract (RVOT) is seen. The normal shape of the posterior border of the RVOT in this view is a bit triangular; seeing a rounded lower border is a hint of RV troubles. Measuring the diameter of the RVOT in this view is possible but can be falsely enlarged because the cut through the RVOT is oblique. Here is a PLAX with a reasonably normal RVOT shape.

Next is a PLAX from a patient with RV dilation. The shape is subtly rounder, but the RVOT does not appear larger relative to the aorta or the left atria because both of these were also dilated in the patient. Thus, the 1/3, 1/3, 1/3 rule for eyeballing the RVOT, aorta, and left atrium size can fail. The PLAXR gives a better visual estimate of RV size.

The RV size is eyeballed in the apical4 if we know that LV size is normal. The part of the RV that is seen in the apical4 should normally appear around 1/3 smaller than the LV. Use an RV enhanced view if the RV lateral wall is uncertain.  Two leaflets of the tricuspid valve need to be seen for a correct view of the RV. A normal RV is triangular shaped (shark fin) in the apical4, with the diameter at the base wider than the diameter at the mid-RV. However, measuring just the mid-RV diameter is good enough in most IMBUS clinical situations because the RV enlargement is diffuse. Here is an apical4 of a dilated RV with severe tricuspid regurgitation. The RV was visually as large or larger than the LV and the mid-RV diameter measured 4.5 cm, which is severely enlarged (see the table below).

A good subcostal view, sometimes with the patient standing, can also confirm RV dilation because of the perpendicular orientation of the beam to the RV walls. Here is a normal mid-RVEDD in SC4.

When we know that the IVS is normal in a patient, we can eyeball the basal RV lateral wall and see that it is less than half the diameter of the IVS.  With any uncertainty, the RV lateral wall can be measured in the subcostal4 because of the interface with the liver and the more perpendicular ultrasound beam. Decreasing the sector depth (and perhaps width) and moving the focus position to the RV lateral wall can help improve wall definition. Because the RV is closer to the transducer in this view, increasing the frequency to RES is a final adjustment that can improve wall resolution, but it is overall difficult to get a precise measurement of the RV lateral wall. Here is an image from a patient with pulmonary hypertension who had hypertrophy of the lateral wall. A more precise measurement would have been obtained with a more optimized view but by eyeball, the lateral wall was as thick as the IVS. Don’t include the pericardium or any epicardial fat pad in the measurement. 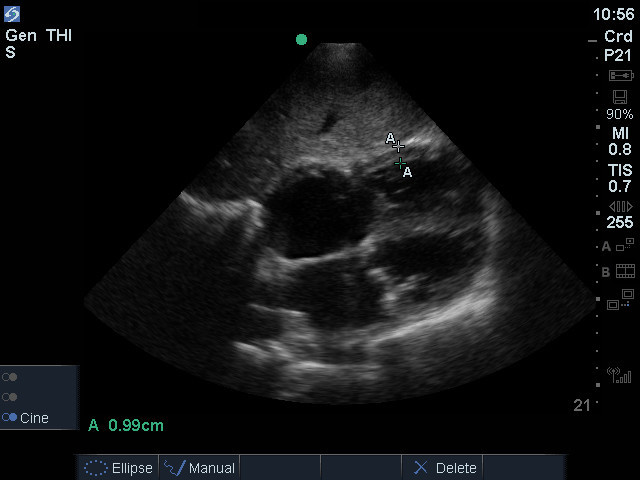 It may be difficult to measure the RV lateral wall in patients with substantial hepatic steatosis. The right ventricle is also strongly trabeculated and including trabeculae or chordae in the measurement will falsely increase the measurement. The measurement usually needs to be made at the beginning of the basal RV, not in the mid-RV.

An indicator of RV volume and pressure overload is flattening (D-ing) of the interventricular septum toward the LV as relatively increased RV pressure distorts the LV. This can be seen in any view that shows both ventricles and the IVS. The flattening occurs more during diastole when RV volume overload is the problem while RV pressure overload most typically causes flattening during systole and diastole. With pericardial tamponade, the fattening may occur just during inspiration. The next PSAX shows prominent septal flattening.

RV function has a greater component of longitudinal contraction than LV function, but it is still important to eyeball the radial function in parts of the RV as they are imaged. Longitudinal function of the basal RV is traditionally measured with tricuspid annular plane systolic excursion (TAPSE). Tissue Doppler s’ of the TV annulus is a better measure of longitudinal function, but TAPSE is still frequently measured so it needs to be understood. The main issue with TAPSE is that it tends to overestimate longitudinal function. Adjust the image to get the lateral tricuspid annulus motion as in-plane as possible to the M-mode cursor. This may require moving the annulus toward the center of the screen or the use of anatomic M-mode (AMM). As with MAPSE, find the difference between the peak and the valley. In the following patient AMM was used to obtain a normal TAPSE.  Normal movement of the TV annulus is usually easy to eyeball after enough training. 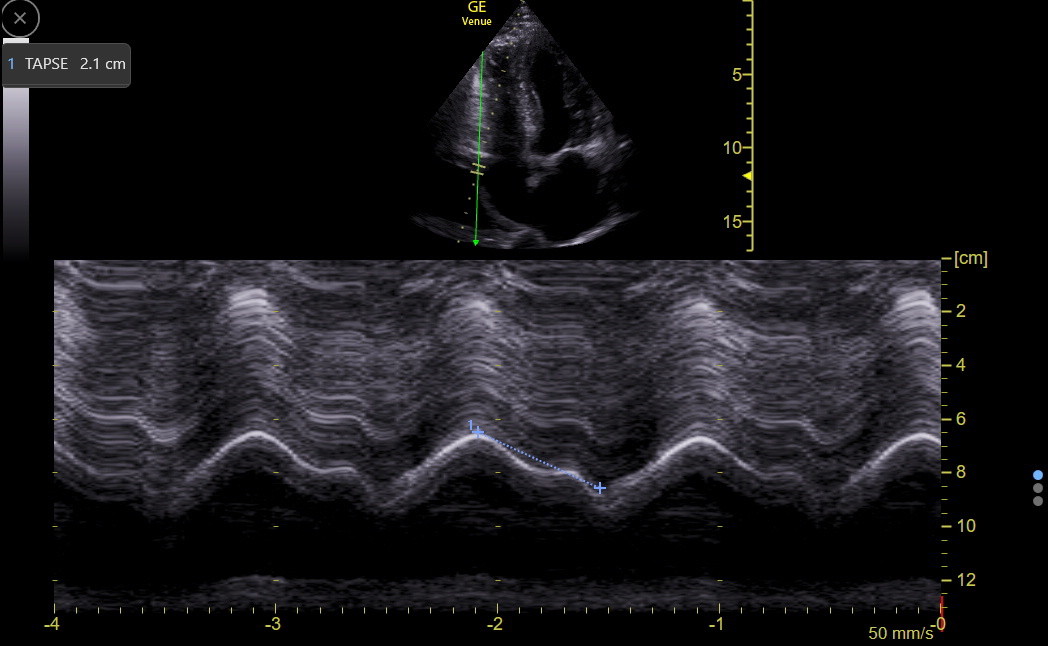 In addition to s’ being an overall better measure than TAPSE, the PW TDI gate with Venue is easier to position and angle correct than the AMM line for TAPSE. An s’ of the TV lateral annulus > 0.10 m/sec is a strong marker of preserved basal RV longitudinal function in middle-aged and elderly patients and indicates the absence of important pulmonary hypertension (Saxena, Echocardiography 2006;23:750-5).

While TAPSE and TV s’ are measures of longitudinal RV function, they are specific to the base of the RV. If RV dysfunction is localized to more distal parts of the RV, TAPSE and TV s’ will be falsely reassuring (see the Advanced Right Heart Disease chapter).