An overview of mitral valve pathology and its assessment with POCUS

MS is uncommon in the primary care clinic because rheumatic mitral disease has become rare. Mitral annular calcification (MAC) is common in elderly patients and leaflet tips and chordae can thicken, but these infrequently cause clinically important stenosis. MAC and calcific aortic stenosis are often associated, and calcification of these annuli is strongly correlated with atherosclerotic vascular disease. Abnormal EPSS can be a clue to MS.

The next clinic patient had marked calcification of the MV (and the AV) and MV movement looked very restricted.

The PSAX of this patient also showed impressive calcification and restricted valve movement.

When the suspicion of MS exists, the additional IMBUS tools are only semi-quantitative. The key indicator is Color in the apical views. Look for increased flow velocity into the LV that results in a “candle flame” appearance because of the narrowing and aliasing of the flow. It is appropriate to look for this in the apical4, apical2, and apical3 views because they each look at the LV inflow jet from a different angle.

Here is an apical Color clip from the prior clinic patient showing a narrowed and aliased inflow jet.

With such an LV inflow jet, continuous wave Doppler can help evaluate the inflow. In rheumatic MS, the E velocity is high and never returns to the baseline off of the E. Here is an older tracing from a clinic patient with rheumatic MS. 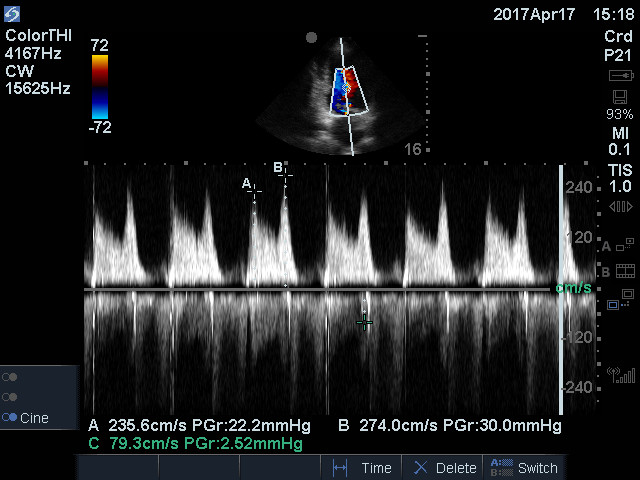 Notice the high E-peak velocity of 2.4 m/sec and the velocity was elevated throughout diastole. Compare this rheumatic MS tracing to the CW LV inflow tracing in the previous clinic patient with MAC.

The shape of this spectrum looks similar, with the velocity never returning to the baseline. However, the measured peak E velocity was only 1.6 m/sec. Unless the CW gate was sub-optimally positioned or the patient was in a very low cardiac output state, this velocity probably indicates only moderate MS, but this patient needed careful evaluation of mitral and aortic valves.

This is a complicated, controversial, and sometimes over-diagnosed disease that occurs in 2-3% of the population, more often in women. But it is a cause of mitral regurgitation, heart failure, infective endocarditis, and stroke. There are various genetic predispositions that can lead to MVP. In simplest terms, mild MVP without any mitral regurgitation (MR) needs infrequent follow-up. Once MR is present, follow-up needs to be more frequent because the progression of the MR and the consequences for the heart cannot be predicted. Ruptured chordal structures and even flail leaflets are definite possibilities.

In addition, as MR becomes significant, the risk of endocarditis becomes higher in relative terms but still very low in absolute terms. The ID and Cardiology societies recommendations against prophylaxis for MVP are based on older population estimates considering whether an MR murmur was heard or not. The presence or absence of a murmur is a poor surrogate for the severity of MR. Nevertheless, since the absolute incidence of endocarditis in MVP with even severe MR is probably not greater than 1 in 2000, the societies recommendations against antibiotic prophylaxis probably make sense for most patients, but it is justified to worry about an MVP patient with substantial MR.

MVP isn’t just a little bowing of a leaflet back towards the LA in the apical4 view, because slight bowing can be normal. The whole valve apparatus in the PLAX and apical views should be evaluated. MVP should have increased thickening of the mitral leaflets and the sub-valvular apparatus without sclerosis. The chordae may also be floppy and elongated. A final characteristic feature is a rocking motion of the posterior-lateral mitral annulus. The following PLAX from a clinic patient shows a characteristic floppy MV from redundant tissue and the annulus had an exaggerated rocking motion.

After identifying MVP, all that matters is looking carefully for MR. If a patient has just a little bowing but no thickness or excess tissue in the whole valve apparatus and there is no MR, we should be reluctant to label the patient with MVP and should rarely recommend formal echocardiography. The clinic patient above had moderate MR and careful IMBUS follow-up was needed.

Trace MR is common and by itself has no impact on patient prognosis. Acute MR would almost never be seen in the clinic because these patients become acutely ill very quickly. The rest of this section focuses on chronic MR. Importantly, the severity category of an MR jet can vary substantially depending on a patient’s preload, afterload, and contractile state.

Chronic MR, as it progresses, is a volume overload on the LV, and the intermediate consequence is a somewhat hyper-contractile LV that eventually begins to dilate. The mitral annulus dilation can worsen the MR in a vicious cycle. Eventually, LA pressure increase is persistent, and LA dilation and secondary pulmonary hypertension develop. In the final phase, LV function decreases and cannot keep up with the excess volume.

As with AR, careful attention must be paid to the consequences of MR by carefully measuring LV and LA size, LV longitudinal systolic function, and the tricuspid gradient. Remember that e’ becomes unreliable when moderate or greater MR is present. The valve must be fixed before LV function drops below normal. LV radial function always looks visually better than it is because of the reduced afterload created by the MR and LV function after MV repair (or replacement) almost always deteriorates because the afterload acutely increases.

Quantification of MR is otherwise done equivalently to AR, looking for the presence and size of the flow convergence zone, the width of the vena contracta, and the length and width of the jet. The MR should be assessed in several views because jets can be eccentric. As a simplification, functional MR from LV dilation causes central MR jets while eccentric MR jets indicate structural disease of the MV. Eccentric jets that are wall-huggers (Coanda effect) always appear less severe than they are unless the most proximal part of the jet is analyzed. Here is a table, virtually identical to the AR table, to help assess MR severity.

Next is an example of moderate MR in an apical5 view.

Finally, here is a patient with severe MR.